PRESIDENT OF CHAMBER OF ARCHITECTS SPEECH AT GENERAL ASSEMBLY 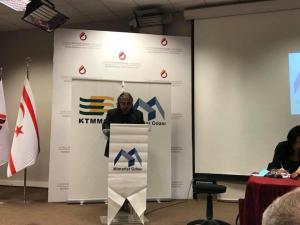 First of all, I would like to greet you with my respect and warm heart.

We come to an end of 51st Period. I will not narrate the actions and events of previous period once again.

Our secretary will already present the two-year action report.

However, there are some of which we did I should touch upon.

With a devastatingly contribution, we made an opening ceremony of our restorated new office which it wide our horizon and brings us a new vision.

Along with CPD Centre establishment, first period of trainings were completed.

CPD Centre has crucial importance while the architectural education ends and professional life begins. Hence, 400 different member benefits from the trainings as part of CPD Centre.

This could be a dream of many country or organization. We made it.

Laying the groundwork of CPD Centre and putting it into practice, the issues of internship and accepting into profession has generated.

This period, we attempt to implement the education that fulfills 5 years education with 300 ECTS with a consensus of the Head of Department of Architecture.

This will be the turning point and reformation in the history of Chamber of Architects.

I, most particularly would like to express my sincere thanks to 51st Period of Executive Board Members, to the Broadcasting Board that working arduously and routinized the Journal of Mimarca with other publications successfully, to the members that working selflessly relative to Architecture and Education Assembly, to all people whose put their effort on Student Form and other commissions, the members that attend CPD Trainings, to the Chamber of Electrical and Mechanical Engineers which they give their contributions to our new building without any return.

Of course we have many difficulties due to growing institution. Yet they are all the things that we can overcome.

We examined through the problems of Visa Office at the member meetings and put forward our analytic opinions. There was a demand from members. The space difficulty should be resolved primarily.

At this point, it is essential to develop the computer programs. In this sense, a service procurement agreement was prepared by Chamber of Computer Engineers. It also involves e-visa in upcoming-period.

Even though some of members think education is dispensable, CPD Centre Trainings and technical tours will increasingly be continued. We will focus on expanding of professional controlling across the island and will support the architects as having an active role in their own projects. Additionally, for securing the justice between colleagues, we will attempt to related authorities and will be a closer follower.

I would like to indicate a well-known quote as “I say there is no darkness but ignorance”.

As I mentioned at the certificate ceremony;

We grow our affection to the Chamber with affinity, respect and fellowship.

Made science and wisdom shine your life.